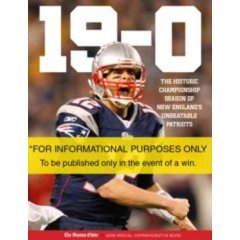 Ah, the football gods have smiled, and the world is happy once again. 19-0? Don’t count your chickens before they hatch. All season long, Rae has been railing against the Patriots, telling me that karma will come back and bite them. In the game that they absolutely could not lose, they lost; once again, karma was served. Congrats to the Giants for winning the game. Their pass rush was fearsome all day long. Brady may have been more immobile due to a high ankle sprain suffered against my Chargers two weeks ago; mobile or not, he still would have seen a lot of turf yesterday against Tuck, Strahan, Umenyiora, and company.

And what about Eli Manning? I’ve always been hard on Eli for spurning the Chargers during the 2004 NFL Draft. He earned my respect yesterday for his gutsy performance in the Super Bowl. Like everyone else in the world, I thought he was going down with three Patriots swarming him at the end of the game. Somehow, he wriggled away and somehow his hail mary pass to Tyree was caught, complete with ex-Charger Rodney Harrison draped all over him.

If there’s anyone I’m feeling sorry for on Patriots, it’s Junior Seau. The ex-Charger great had a good run this year, but a Super Bowl victory was just not in the cards. Perhaps now he can finally graduate and retire as a Charger.

In the coming weeks, we’ll learn more about the purported cheating done by the Patriots over the past 7+ seasons. The ensuing repercussions could be far worse than the sting of a Super Bowl loss. 19-uh-oh!