For the religious, this past weekend was Easter. For the Apple faithful, it was iPad launch weekend. Since I attended the iPad Announcement Event, I had the opportunity to use the device before the general public; so, buying it was not a problem, finding a place from which to buy it was! Currently, Rae and I are on the other side of the United States screening our documentary film Autumn Gem! Knowing that I would be in Boston, I skipped the initial pre-order rush and scheduled my iPad to arrive in the second batch of shipments on 4/12. As with any big Apple release, however, I found myself restless on Friday night. The apartment in which we were staying was only 2 blocks away from the Apple Store in Cambridge. What reason was there not to go there in the morning or camp out with the rest of the Apple faithful? The weather here in Massachusetts and Boston has been fantastic over the past few days, unlike the wet and cold conditions seen back in the Bay Area.

So, this was how I found myself waking up at 4:00am to walk over to the store. I soon realized that things play out differently at this Apple Store than my local ones. For starters, the doors to the mall were locked, and there was no one else waiting to get in! Contrast this with the Palo Alto and Valley Fair locations, where people were lining up the day before to be the first to get their iPads. 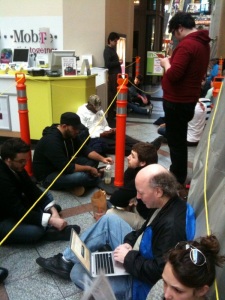 So, I went back to the apartment, did some work and slept for an hour until 7:30 am. Despite there being a little over an hour to the launch, there were only a handful of people in both the reserved and non-reserved iPad lines! I figured most people arrived at the store to get in line at 7:00am. I guess the shortage was due to several factors: (1) the ability to pre-order and have the product shipped to your house, (2) the fact that the hype was not as big as the original iPhone. Furthermore, the iPad is a device you have to see and feel to understand, it’s not something like a cellphone which everyone has. Back in 2007, it was easy to understand why the iPhone was so much better than the crappy phones we were all carrying at the time. While the iPhone was an easy sell, the iPad for many people posed more questions than answers.

I was in and out of the Apple Store in 40 minutes by the time the doors opened at 8:55am. Everyone in line got their own Apple Specialist to assist them with the purchase. I ended up buying the case and the VGA adapter for two reasons: (1) I needed some case protection for the iPad when I stuff it into my backpack and (2) I planned to run our Autumn Gem tour presentation using the iPad during one of our remaining (and future) screenings.

Probably the biggest question regarding the iPad is why buy it in the first place? Do you need an iPad when you have a laptop and a phone? What is this third class of mobile devices that Steve Jobs… err… Apple is trying to sell us? How is the iPad better than a netbook? I’m going to end up answering this question in a somewhat roundabout way. In the coming weeks, there’ll no doubt be plenty of bloggers and writers coming up with interactive charts and scorecards comparing the iPad with various devices. Instead, what I will talk about is how I view the iPad through the prism of being involved with mobile computing for the past seventeen years.

And, seeing that I was in Newton, Massachusetts the other night for a screening, it’s only appropriate that I mention Apple’s first handheld computer, the Newton, at this point.

Released in 1993, the Newton opened my eyes to the possibilities of mobile computing and was the prime catalyst for where I am today. It promised communication and computing in a portable package. Instead of my PowerBook 180, I brought my Newton with me to many of my classes — just ask any of my Stanford classmates! While studying abroad in France, I took nearly all of my notes on my Newton using Palm’s Graffiti handwriting recognition application. Newton was my calendar, address book and alarm clock. I wrote nBattleship, one of the first IR networked games; too bad there were no other Newton owners to play with! Using a Ricochet wireless modem, I had wireless Internet access years before WiFi and Airport became commonplace. All this back in 1996!

With the release of the Newton MessagePad 2000, Apple was positioning the device as a possible laptop replacement. A sticker on the box listed what came with the 2000: the Newton keyboard, carrying case, email client, web browser, word processor, spreadsheet and connectivity software for Windows and Mac OS-based computers1. See photo below by kubina for a closer look at the box:

The iPad is everything I wanted the Newton to eventually be, plus so many things that I never even imagined to be possible (i.e. multi-touch interface). It’s going to hold my photos, my music, my videos and hold my notes, documents, presentations, and games. By virtue of it being a connected-device, it’s giving me access to the full Internet (minus Flash, of course). Despite my love for all things Newton, its Internet and web browsing capabilities were pretty pitiful. But hey, for something that’s 13-17 years old, it’s still somewhat functional!

I clung to the Newton over these years because of the ideal it represented to me — computing in a package smaller than a traditional laptop. In the years following the Newton’s cancellation in 1998, many portable devices — from Palm handhelds, BlackBerry devices and even a Vadem Clio running Windows CE — went through my hands trying to succeed the Newton. Once the iPhone came out in 2007, I knew that the time was nearing where I could retire the Newton once and for all. I did wish for a bigger version of the iPhone or iPod touch, and with the iPad, my prayers were answered!

The iPad for me isn’t a complete laptop replacement. I still need to use a variety of applications (all running at the same time) do my computer consulting work — Photoshop, Aperture, Final Cut, BBEdit, Transmit, ExpanDrive, Mail and Terminal — that we require me to have a laptop. On this tour, we’re lugging two 15-inch MacBook Pros in a CompuTrekker AW backpack (along with my camera, DVDs, cables, chargers, etc.). Believe me, it is HEAVY! We brought two laptops for redundancy when showing our Keynote presentation and showing the film. Tonight at Wellesley, we used the iPad with the VGA dock adapter to do both of these things, so I’m convinced that we don’t need to bring another laptop next time.

I represent the twenty percent of the population that needs to use a computer for mor than just email, browsing, entertainment and media consumption. The remaining eighty percent has a perfect, inexpensive device for them now. If Apple used to produce the “computer for the rest of us,” they are now producing the computer for everyone else! I strongly feel that once people see what this device can do for them, they will snatch it up like hotcakes. Other companies will follow suit with their own iPad clones. Great for them and good luck! The winners in all of this will be the consumers.

The Newton was my third love affair with Apple, which first began with the Apple ][ and was followed by the Mac. The Newton was subsequently succeeded by the iPhone; now, the iPad combines what I loved about the Newton with what is great about the iPhone. I’ve come full circle. Now, the rest of the world — at least, the millions upon millions that will buy the iPad — will know what I’ve been feeling and waiting for the past seventeen years!

I will have more thoughts in the coming days about the iPad. Right now, I am on a bus to New York from Boston and I need to get some sleep!

1 Of course, you have to buy all these other things separately for the iPad; the only thing that comes “free” with it is the email client and connectivity software! Still, the price of the base iPad along with these components is cheaper than the Newton MessagePad 2000 when it first came out.

As Newton fell further and further behind the technical curve, it remained ahead in a few categories over these devices: portability, usability and battery life. Once the iPhone came out, I pretty much retired the Newton expect for occasional appearances at the local Stanford Newton User Group. I’ve long been waiting for a larger iPhone or iPod touch. And so here comes the iPad.

The promise of the Newton was that you could take computing on-the-go with you. The promise of the Palm was that it was a window to your desktop. Nice ideals, but in reality, you couldn’t bring everything about your life with you on these devices. Music, photos and videos. These have been part of my life for the past thirty years. I’ve been ripping home-videos that I made in the late eighties and early nineties. None of them were on my Newton nor my Palm.

iPod brought music into the palm of my hand. I skipped over the video iPods and went straight to the iPhone. While it can display photos and videos, it’s not the best for sharing or experiencing all the wow in this media.

7 thoughts on “Personal Reflections on the iPad”