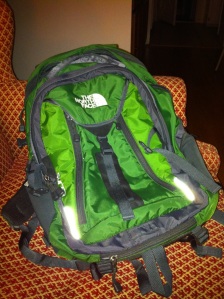 Rae and I were at Valley Fair this evening to meet up with Felix, Osvaldo and Cheryl. We went to the Eddie Bauer store to look at their new bag lineup. With its Adventure and Vantage backpacks, the company is taking cues from and targeting The North Face’s Recon and Surge packs. Eddie Bauer is currently having a back-to-school promotion and backpacks are $20 off. While the packs were of lesser quality overall than TNF’s lineup, they are $40 cheaper.

We then went upstairs to The North Face store. A few months ago, I bought a green Surge backpack. While inspecting the display Surge, I immediately could tell that this was the next year model! The new packs sport YKK zippers and have a lightly padded waistbelt instead of a simple waist strap. There are fewer pockets in the secondary compartment of the Surge, and the shoulder straps have been redesigned. The company also moved the top handle to the back. On the previous edition of the Surge, the top handle was attached to the part of the backpack that opens up. If you were to open the bag, the handle becomes useless. Good decision to move it up top.

While I find my Surge to be a serviceable backpack, there’s still room for improvement. Ideally, I’d like something that’s a cross between the Surge and the Recon. Give me the dedicated laptop compartment of the Surge and add the expandable mesh front pocket from the Recon. I could do without one of the front compartments of the Surge but keep the waistbelt and top handle of the 2010/2011 model. In a way, I kinda just described the Eddie Bauer Adventure backpack! One day, I’ll develop some mad sewing skills and fashion my own ultimate backpack!

Update: I just placed an order for an Ivar Revel G2 backpack.
Ivar packs are unique in that they have a shelving system inside the back. Most backpacks, including the Surge and Recon, are basically big pouches where everything sinks to the bottom. While comfortable with light loads, these backs can become a pain when fully loaded. I’ll likely be testing the Ivar in the Bay Area before our Autumn Gem tour to Australia next month. In the meantime, I’ve put up the Surge for sale on Craigslist. As I mentioned above, it’s a fine backpack, but not quite ideally suited for my needs.